Starting A Business At 40 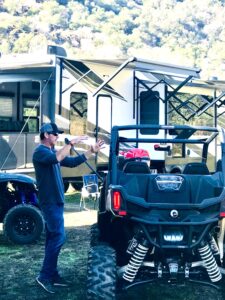 As a kid I did the traditional lemonade stand, bought and sold baseball cards and made the occasional comic book trade. When I look back though, my greatest kid boss claim to fame was during my time working for the San Jose Mercury news, delivering newspapers 7 days a week at 4 am before school. During that time I grew a route from 50 customers to over 300 and hired my friends to help me deliver the papers – and this was at the ripe age of 11! Despite my early success as a child hustler, if someone told me in my late 20’s that in less than 12 years I would start a business at 40, I would have thought that they were out of their mind.

I started my “life after undergrad” with the city of Sanger. After 6 incredible years I accepted a Director position with the city of Chowchilla, with the goal of becoming a City Manager someday. At the time I was studying for my Masters Degree in Political Science and Business Administration -Yes, the double. Although thankful for my time and the lessons I learned working with Chowchilla, in January of 2007 I started a completely new position as the camp director at River Way Ranch Camp.

It was there at “camp” my advertising, marketing and entrepreneurial mind began to grow. It had always been there, I just never knew it. During my time at River Way I was promoted from Camp Director to Chief Operating Officer (COO) due to my success growing the business from 2.2 million per year to over 7 million in just 3 years post major recession (2009). During this time I went through the motions of hiring and firing a handful of marketing companies as I tried to find someone who “got it” – why was my vision so hard to grasp?

Not only was my vision not being brought to life, but I was constantly being presented with ideas and work that was subpar, especially for the price tag that followed. As I was sharing my frustrations with a Board Member (who was part of the “marketing committee”) she said: “well it sounds like you need to start your own company” and that is exactly what I did. Not only did that board member plant the seed for what later sprouted into THM but she left me with words of encouragement that have stuck with me to this day.

With some planning, late nights and countless hours of identifying who “we” would market to, I made the initial investment on the business using my retirement to fund it all. I am amazed to look back and see how far this company has come from an initial idea, to supplying the central valley, Oregon, Nevada and Arizona with high quality content and concepts that truly drive change in the way they do business. There are not many people who would leave a career, to start over with no money, no support and no real path- and that’s the beauty of dreamers. We will figure it out along the way, forever excited about the simple accomplishments we make along the way.

My advice for anyone stuck between following their passion and sticking to a job they are not thrilled with, purely out of fear, is to chase your dreams. Life is short, live it without “what if’s.”