Word on the Street Volume 10: Honesty is the Best Policy, but Free Fries Comes in a Close Second

If you don’t know, now you know

Our digital world is constantly changing to better serve us. Are you keeping up? If you’re having trouble staying on top of the latest news, launches, or revised regulations, stay with me. I promise to make it short and sweet so you can get back to living in the present. 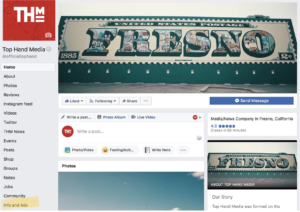 Facebook has officially said sayonara to “dark posts” with the use of transparency tools. If you aren’t familiar with what a dark posts is, let us break it down for you. Have you ever googled a product that you were interested in buying? Do you see said product all over your Facebook newsfeed now?

Well, this is an example of a dark post, also known as a targeted ad. These ads are not published the same as a boosted or organic post, instead they show up as “sponsored” content in feeds of users who have been specifically targeted. Luckily for us, we can now see what ads companies/influencers are running by simply going to their page and clicking on the “Info and Ads” tool found in the left hand column. The decision to remove dark posts from the popular social media platform came after the Russian interference in past political elections.

The moment we’ve all been waiting for …

POSTMATES LAUNCHES IN FRESNO! (golf clap please) With the launch of this beloved delivery service, Fresnans can get almost anything delivered to their door steps within 25 to 55 minutes. Not only do restaurants participate, but retailers such as AutoZone, CVS, Walgreens, and Office Depot have joined the delivery movement.

Make staying in the new going out by simply signing up with your email, placing an order, and having your items delivered to you in less than an hour. If this doesn’t entice you, maybe Chipotle’s July promotion will. Use the code: CHIPOTLE100 to have your delivery fee waived the entire month!

The race is on! Will Apple be the first publicly traded company valued at one trillion dollars or will Amazon come from behind and spoil their day? Recently, the tech company’s stock (AAPL) reached an all time high after increasing 2% in shares before the Berkshire Hathaway annual shareholder meeting.

The cat and mouse game between Apple and the number one retailer in the world, Amazon, has become a trending topic as people are anxiously awaiting to see which of these market giants tip the $1,000,000,000 mark!

Celebrate Fridays with free fries! You’ve made it through the week, so Ronald McDonald thinks you deserve a yummy treat. McDonald’s is giving away a free order of fries every Friday for the rest of 2018 if you spend $1 using their mobile app. (limit one order per person)