If you don’t know, now you know.

Our digital world is constantly changing to better serve us. Are you keeping up? If you’re having trouble staying on top of the latest news, launches, or revised regulations, stay with me. I promise to make it short and sweet so you can get back to living in the present.

I’m sure you have already heard via Twitter that IHOP made a HUGE branding move on Monday by announcing they have temporarily changed their name to IHOb (International House of Burgers). This marketing campaign started trending after the big announcement, which proves they got what they wanted: everyone talking about them. A simple move of flipping the “P” upside down to make it a “b” has sent the internet into a frenzy.

Popular food chains such as Wendy’s, Burger King, and White Castle didn’t waste any time clapping back at IHOP … err, i mean IHOb. The fast food competitors took to Twitter to show how they really felt and to be honest, we couldn’t get enough of this feud.

You may be asking yourself why you should care about Net Neutrality after seeing it all over your newsfeeds. Well, we’re here to break down what it is, why you should care, and how it could affect us and our wallets us very soon.


Net Neutrality is the principle that Internet service providers should enable access to all content and applications regardless of the source, and without favoring or blocking particular products or websites. That means all the actions you take online such as checking social media pages, streaming movies, uploading pictures – should be treated the same. You shouldn’t have to pay more for one over the other.

This law prevents internet providers from dictating what you have access to online, which creates an even playing field for content providers. Without this law in place, consumers would not be able to control what they see online. See why you should care now? 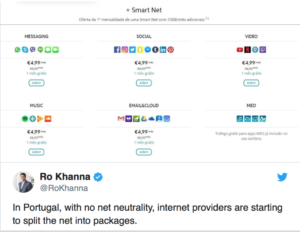 Big Internet providers such as Comcast and Verizon want to be able to control what we see and believe we should pay more for certain access to the web. If Net Neutrality is removed, we will lose control of the internet and small businesses could fold due to high prices for basic internet access.


In light of the FCC repealing the Net Neutrality rules, you’re probably wondering what you can still do. The fight’s not over! Contact your representatives and let them know you care about Net Neutrality and the consumer should remain in control of what we have access to! Find out more about how you can help here.

Twitter’s VP, Keith Coleman, is hoping small changes will make big moves for users’ experiences while using the app. The company has been working on new ways for us to discover and follow the stories and events we care about on our timeline. This decision to rework the logistics came just in time for FIFA’s 2018 World Cup. The new update will begin notifying users when an event is happening that we might be interested in. “We want Twitter to be the little bird on your shoulder that tells you what you need to know when you need to know it,” – Coleman. 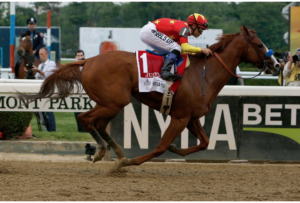 The 150th running of the Belmont Stakes recently took place and concluded with a momentous ending. Justify, the horse that captured the hearts of millions, is the 13th horse in history to win the Triple Crown – the most prestigious accomplishment for three-year-old Thoroughbred horses. To win the Triple Crown, the same horse and rider must win The Kentucky Derby, The Preakness, and The Belmont Stakes back-to-back in the same year. This is the second horse under Bob Baffert to win the Triple crown, the first being American Pharoah in 2015, who ended the 37-year long drought.

FIFA’s 2018 World Cup kicked off on Thursday morning in Russia. The international futbol (or soccer as us Americans called it) tournament involves 32 national teams who are competing for the ultimate title, 2018 World Cup Champions. If you want to catch part of the action, tune into Fox Sports leading up the championship game on July 15th.

A group of players from the Fresno FC Women’s team have been making winning moves while competing in Neymar JR Fives. Upon winning the regional round, the team advanced to the National Championship in Miami, FL over this past weekend. After a hard fought 3 days of soccer, the Los Zorros claimed the National Title and will be representing the United States at the World Finals in Brazil on July 21st, where they will be competing against 53 countries. Congrats Jaycee, Nikki, Madi Cruz, Myra, Marina, and Erica! 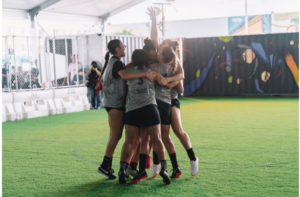 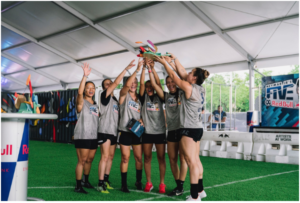